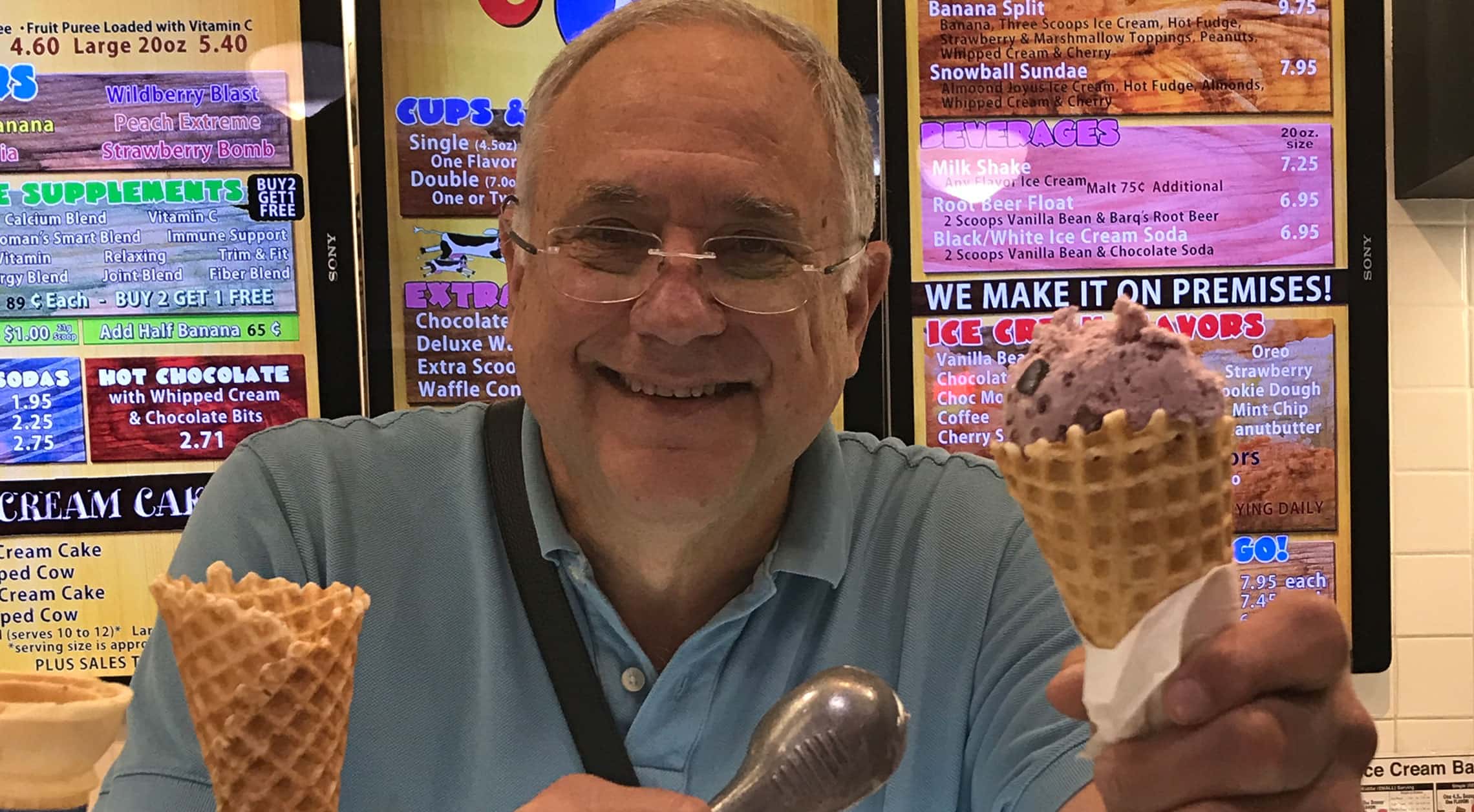 "Meet the Merchant" was created to introduce the individuals behind the boutiques, restaurants, and galleries in Historic Park City. This month we introduce Ken Davis from Java Cow Creamery, Café and Bakery.

Java Cow, conveniently situated at 4th and Main Street is rarely overlooked. As the oldest coffee shop on the street that happens to house a bakery and ice cream shop, it’s hard to pass by without temptation anytime day or night. While you’ve likely visited Java Cow more than a time or two, it is unlikely that you know the full-story behind the sweet treats you can find within.

Ken, his wife Marcie and daughter Samantha moved to Park City in 1999. Originally from Great Neck, NY, Ken previously enjoyed a successful career as President and CEO of a large public retail firm with more than 4,000 employees. As you could imagine, running any company with 4,000 employees is no easy task and this particular company was troubled before Ken even took the helm. He conceptualized and then executed a company turn around program, which entirely changed the retail concept in a period of six months. Once the new concept was in place the company acquired several other companies in the same industry, as fate would have it, Ken’s company ended up being acquired by an even larger company. All of a sudden Ken found himself free to explore other opportunities. (Believe it or not, the company’s name was Pharmhouse and it’s tag line was “Everything for health and home for less, everything except COWS!” Talk about fate!)

Before tackling a new challenge Ken and family took an extended vacation to Park City. They loved it so much they ended up purchasing a 2nd home. Their planned two-month hiatus quickly turned into four, enjoying all Park City had to offer. Ken and Marcie had been vacationing/skiing in Park City since 1974. During that time, they visited Park City every other year and explored other ski towns on the “off” years. They eventually decided that Park City was the best choice for a variety of reasons: easy to get to, weather and snow were better, and Park City was more welcoming than other places they had visited. After the extended vacation they returned home and instantly knew they were meant to be in Park City. Their home was listed and sold quickly, they returned making Park City their full-time home.

For years while visiting Park City, Ken would comment how much simpler life would be running a small shop on Park City’s Main Street (like Cow’s Ice Cream) rather than a large company. Upon arriving in Park City after moving, Ken’s 6 year old daughter Sami wanted ice cream. They went to Cow’s only to learn the shop was closed and for sale. Ken went home and told Marcie that he was buying Cows. Nearly 20 years later we wonder if Ken still feels running a shop on Main Street was the simple path?

When Ken purchased Cow’s Ice Cream it was a Canadian franchise and Starbucks was in the place of the café and bakery. In 2003, Starbucks (already opened on Park Avenue) decided not to renew their lease on Main Street. Ken decided it would be easy enough to run a coffee shop along with the creamery so he took over both sides and acquired a local bakery (and their delicious croissant and muffin recipes). The bakery was incorporated into the operation in the building‘s basement. Eventually, it was no longer economical to run the ice cream shop as a franchise so Ken decided to learn to make ice cream. After extensive research, several classes and time working with industry consultants, Ken started making the ice cream you love at Java Cow on-site. The baked goods, soups and other offerings are also made from scratch on-site.

Ken operates under the philosophy “Improve, Adjust or Die” and is always experimenting and adapting all parts of the business. You might say he’s a serial learner. Ken loves the opportunity to learn from individuals he meets along the way. If you’ve ever enjoyed the honey lavender flavor or matcha green tea flavored ice creams at Java Cow you can thank a wine maker Ken met in Napa (who grows lavender as well) and a couple seated next to him in a restaurant (tea importers) during the NRA restaurant show in Chicago. If you happen to enjoy Java Cow’s gluten free pastries, you can thank Ken’s endless quest for learning and experimenting; he mixes 10 ingredients to make the gluten free flour used for those products. If you’ve happened to enjoy the Precious Peach ice cream, you can thank Smith’s Orchard in Provo. Ken met Scott Smith at a farmers market years ago and now buys a couple hundred pounds of only one very special kind of Scott’s numerous varieties to ensure the best tasting results. He does these things because he loves to and he believes going this “extra mile” makes the experience at the shop memorable. Ice cream is always special but really good ice cream is unforgettable. For this story, I was fortunate enough to try the Purple Cow. As I write this post, I can’t wait to return for another cone!

When Ken isn’t learning or traveling in hopes of uncovering the next new flavor at Java Cow, he and Marcie have been busy helping to shape Park City into the community we love and adore. Ken served two terms as Board President of the Historic Park City Alliance. Marcie is a top-producing residential and commercial broker with Sotheby’s International Realty; has served as a Director of the PC Board of Realtors for 5 years as well as President of the Board of Realtors in 2014. She continues to serve on several committees of both the PC Board of Realtors as well as on the Utah Association of Realtors. She is also a long standing Director of the Park City Museum.

While they may have thought they were taking the simpler path, Ken and Marcie have given their all to ensure Park City and Historic Main Street remain interesting. They love that so many independent operators exist on Main Street and that it hasn’t become the same as every other ski town.

As for me, I love house made ice cream and pastries, and I love the effort Ken and Marcie have made to maintain the Park City we know and love. Thanks for taking 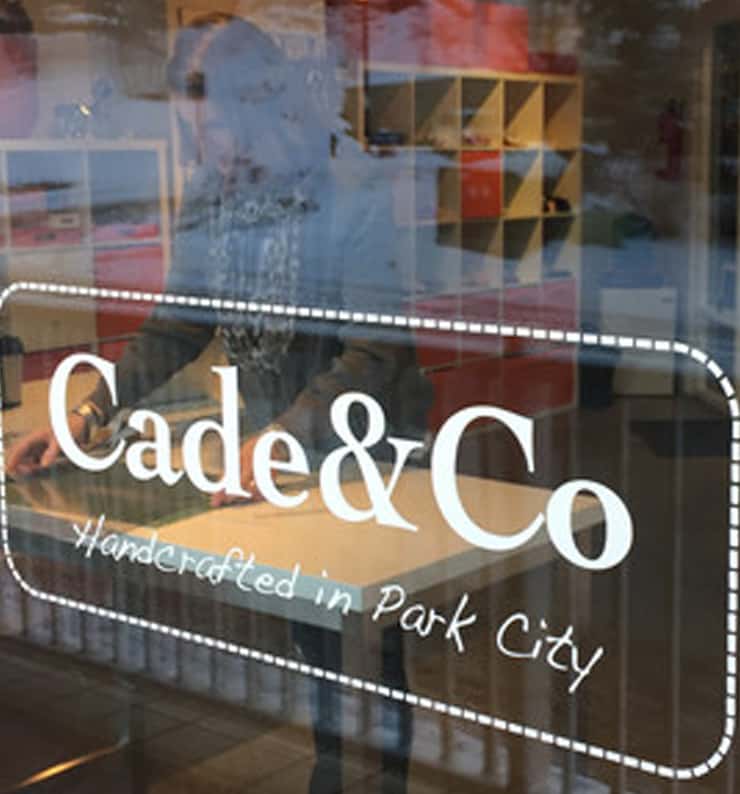